Band Camp is over for the summer and it's now time to move on to something else, like weeding the garden, picking the tomatoes and putting up corn for the upcoming winter.  Time marches on and life is a continuous ebb and flow, like the seasons, like the ocean's waves.


Since this is teen son's last year of high school, there will be many more "lasts," but then he will start college and that will start many more "firsts."  There can't be an ending without a beginning, so as we are going through this last year of high school, I will be thinking about how this all began in Kindergarten and is ending with his Senior year and will begin again (with college).  Life....gotta love it!!!  ;) 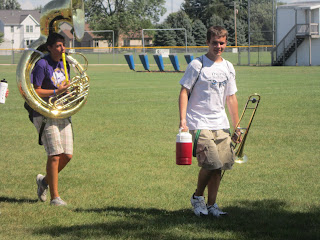 (walking off the field at the end of band camp 2011)
I also noticed something when I was busy volunteering at this year's band camp.  This was my last camp that I will be actively volunteering at all day, every day, and I didn't feel the need to "prove myself" like I did at the past camps.  I just did what I could from day to day and didn't leave with the feeling that I didn't get enough accomplished.  I just felt more relaxed and at ease.  Does that make sense?


I enjoyed getting to know some of the freshman Mom's and really look forward to being around them during the next few months as the band performs at their band competitions.  Then, when the last and final competition comes to an end, and my duties as the Snack Queen are over, I'm gonna take my invisible crown, place it on the head of my successor, raise my water bottle to her in a toast and bid that part of my life adieu!   :) 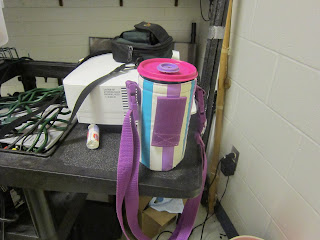 (My trusty water bottle that has lasted for 4 band camps.  I felt it deserved a photo!)  LOL

Have a great day everyone!  I'm off to husk some corn, cut if off the cob, blanch it and bag it for the freezer!  It's gonna be alot of work but my family will enjoy it when the snow starts flying!!