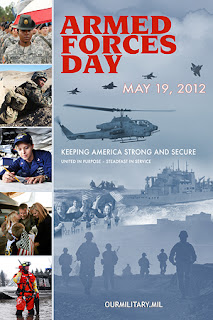 President Harry S. Truman led the effort to establish a single holiday for citizens to come together and thank our military members for their patriotic service in support of our country.

On August 31, 1949, Secretary of Defense Louis Johnson announced the creation of an Armed Forces Day to replace separate Army, Navy, Marine Corps and Air Force Days.
The single day celebration stemmed from the unification of the Armed Forces under the Department of Defense.

Teen son and his high school Band are going to be playing at the Armed Forces Day event to honor our County's Veterans at the ASTA Care Center in the neighboring town.  I cannot wait to hear them play "America the Beautiful" and "Battle Hymn" as well as "Star Spangled Banner" and "Main Street Parade."  It should be a very moving ceremony and I'll try to get some pics so I can post them later on.

Have a wonderful day, everyone!